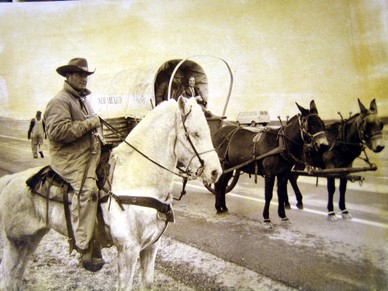 Photo: Wagonmaster Bud Pena, from California, in front of the New Mexico wagon and mule team.

... Protestors followed the train and staged a peaceful demonstration which included a skit presented by the Teatro Collectivo . ...

The Wagon train was the idea of Thelma Gray, vice-president in charge of public relations for the Aitkin-Kynett advertising agency in Philadelphia. ... (I)t isn't surprising that the presentation by the Wagon Train in Las Vegas sounded like a commercial for Elmer's Glue.  It was a commercial soaked in the Stars and Stripes, selling its products; the most important of which is the image of the American corporation as benevolent, honest, and synonymous with freedom.

... It's another gimmick to sell products and peddle the Disneyland version of American history being taught by the schools and the media.  It promotes a mythology designed to keep people in the role of passive consumers, ignorant of the true history of the U.S., a mythology that is all too effective.

One of the hired hands of the Wagon Train, when confronted by the angry Chicano demonstrators remarked, "I guess there must be a lot of discrimination around here."  Someone in the crowd shouted back, "Yeah, and it's been going on for two hundred years."

I was on that wagon train. I'm the last wagon in the picture. That was a long time ago. I was an independant and started in tucson. I have photos and i have short movie. I had a great old wagon that brings back good memories. sorry if it upset anybody. I was 24 and looking for another adventure. After the las vegas think i traveled alone. Left at Santa Fe and traveled to Kansis city alone on back roads. Rehooked with main train their for the rest of the journey. tom

where can I find more pictuers of the 1976 wagon train mainly that went through Athens michigan?

I, too, was involved with the BWTP, serving as Advance Coordinator in New Mexico. Bud Pena, the Wagonmaster, truly fit the role and did a wonderful job. I would love to see Tom O'Keefe's photos and short movie of that once in a lifetime experience!

I rode from Rodeo, NM to Trinidad Colorado with my father on two grey part-arabs named Saudi and Shama.

I was 11 yrs old on that wagon train I remember alot but want more info from anyone who was on that train please e-mail me at liveindead@yahoo.com my e-maile is just a song title from a fav band so please dont judge me on a name.

i was in the 1976 wagon train as a kid. my mom carried the flag into valley forge . i would love to find pictures of this. if you can help please email me @ finneym65@yahoo.com

I was on the southern route and had just got out of the Green Berets. i was always looking for fun on the train and did not keep any pictures. I am from Crossville TN and Cookeville is where we picked up the train--we thought we were just going to ride for a day!!!! hahahaha-- it lasted for 2 1/2 more months. Our wagonmaster was Col. Toby out of New Mex. I had a great time and although i was pretty much a drunken kid at the time,,,[the Lord fixed that 4 years ago] i had one of the best times of my life,,,i sure hope i am around for the next RIDE!!!!! Any pictures>>> please send to my email---paul

I rode with JB Hampton on the Southern Train. I rode from outside Bristol, Tenn to Valley Forge, I was 17 at the time. I remember Col Toby well and Mooney Lynn, lots of beautiful scenery and lots of wild parties.

I was on the wagon train as a kid from northern PA through Tannersville and Bartonsville to Valley Forge..the only pic I know of is hanging on the wall in the Tannersville Inn..My mom ended up being an outrider for th PA state wagon on a Tennessee walker./.Great times...

As President of the World Positive Thinkers club I am blessed with the friendship of the person responsible for creating and coordinating and raising money for the wagon train. Thelma Gray is on pages 3 and 4 of the wagon train pilgrimage book. The wagon train was considered the biggest PR event in history and landed Thelma in the PR Hall of Fame.

Thelma is 90 now is still breathing great ideas out of that frail body, and still talks about the wagon train.

I know she would love to hear from anyone associated with the wagon train, and if you would like to send her a greeting send it to mail@worldpositivethinkersclub.com and I will forward it to her.

I am the site manager for a museum in the WV state museums system and we are in process of restoring/preserving the WV bicentennial wagon which has been in outdoor storage for 30 years. Any one out there that can help me find photos of the wagons from as many angles as I can get and/or specs and plans for an original wagon would have my undying eternal gratitude.

Hello, I have 2 small 8mm reels of footage of the wagon train in Lancaster PA. I am planning on listing them along with other home movies on E-Bay. I was doing research on the wagon train and came across these posts. I have about 30-45seconds of the West Virginia wagon rolling down Millersville road.

I am a music ed graduate from Penn State University - 1977 and I joined the BWT in Wyoming/February-76 and traveled to Valley Forge. I have several pictures but no video. MY train traveled from Wyoming, down through Kentucky, Missouri and up to Pa. I was part of the entertainment from Penn State and still have the hat complete with the pins hanging on my wall in my office.

My Grandfather is Bud Pena and my mother is Patty Pena. We have a lot of memeroblia from the wagon train.

Memories! I was helping my daughter in college do a report on the Wagon Train and just decided to google. I find a picture of my dad who passed away 4 years ago! Thank You, to who posted this! I am Patty Pena, I was on the Wagon Train too.
Jeffery Boggs, I remember the Vison Quest Wagon.
Is anyone else out there from the "Oregon Trail Wagon Train"?
We had a lot of good times!!

Me and my 15 year old daughter wnt on the train. We left Maine in May and got to Valley Forge the night before. I had an appy that was used in most of the parades that went through the towns. If anyone has any pictures of him I wuld appreciate it. Thanks

I was hoping I'd find reference to a book or DVD on this wonderful event. Please, please someone that experienced it first hand write it down before it's lost forever. I was a young woman in Pa. when it came through and was absolutely thrilled. I only wish I have the opportunity to experience something like this in my lifetime.

I spent a week on the southern train with my family. We were living in Tahlequah, OK and travelled with the train from Chekotah to Sallisaw. We had one horse and my wife and I took turns riding and moving camp. My elder daughter rode in the TX wagon, one day, because it was driven by a nice lady named Hazel. The horses spooked and setoff across a field and the wagon was stopped by fouling a pole that took off the rear axle. A new axle was trucked in and the wagon was ready to role by midnight. No-one was hurt.

The little lady who drove the Texas wagon was Hazel Bowen from Antelope, Jack County, Texas. Went through there in 2003 and was saddened to see she had just passed away a couple of years earlier. Hazel always liked a chaw of Tobacco. Was a friend to all. As to the lady from PA, being a Texas boy who had never been up North, the PA people were some of the greatest people we met, remember a big party at Downingtown? PA, humdinger.

My name is Stan Bashura and I live in Seymour, CT. I was the official "driver", teamster for the Connecticut Wagon in the Bicentennial Wagon Train Pilgrimage to Pennsyvannia in 1976. The horses were supplied by Joe and John Kriz (Kriz Hitch)from Bethany, CT. We were part of the Northeast Contigent which included wagons and riders from Maine, New Hampshire, Vermont, Massachusetts, Rhode Island, Connecticut, New York and New Jersey. Our Connecticut Wagon Master was Elmer Gladding, and Roger ? was Head Wagon Master.

I would appreciate any correspondence from anyone that was on the Northeast Contingent. I have some pictures and newspaper clippings I could share. Claire from Maine: I believe I have a picture of your Appaloosa! I was hoping to see if there would be any kind of a reunion, which would be nice. I'd like to get one started if anyone else is interested. I for one will never forget the great time we all had and the wonderful people we shared our travels with on the wagon train.

My father was Elmer Gladding, the Wagon Master for the State of Connecticut. I was in school, but I rode through CT into RI and then rejoined to ride into Valley Forge. I also remember the Kriz Bros. They had Belgian horses and, if I remember correctly, took care of the blacksmithing for the Budweiser Clydesdales. We lived in Southbury, CT, and parents (Elmer and Ruth) were the leaders of the Oxbury 4-H Club. On the Wagon Train, my Dad rode a big black Morgan named Spook.

Traci, you are correct! The Kriz Hitch were Belgian Horses, all blondes. I had Chucky and Pete as my team on the Wagon Train. The Kriz Bros were blacksmiths, and their sons are carrying on the tradition. Yes, they did shoe the Budwiser Clydesdales, I even got the chance to once take care of their prize Clydesdale Horse named Goliath! I would love to share some stories about your dad. He was a great friend.
You can contact me at sbashura1952@sbcglobal.net

Hi my name is Mac.I was Campjack Mac and remeber everything.I too had alot of fun and would love to hear from evrybudy.wagon train was GREAT.Do I got stories