The Albuquerque Journal makes it sound like a bad thing.  Those pesky environmentalists are putting people out of work!  Especially the poor Navajo and Hopi!  How nice and simple and clear cut for the business section readers. 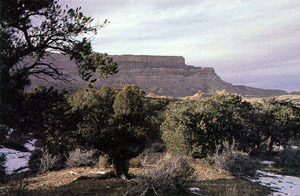 The back story is rich, complicated, long, and full of enough intrigue for an HBO mini-series.  It's tied to water, crooked lawyers, the Cheney Energy Task Force and the Navajo-Hopi land dispute.

The Black Mesa mine was dependent on a 275 mile long coal slurry pipeline that has been operating since 1970 using over a billion gallons of fresh water a year and impacting wells and springs over 50 miles away. 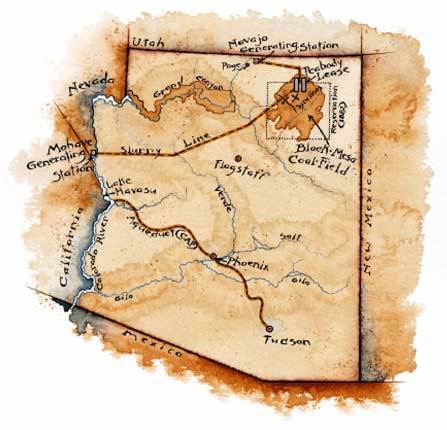 The slurry line fed the Mohave Generating Station in Laughlin, Nevada - one of the dirtiest coal plants in the West, putting out 40,000 tons of sulphur dioxide a year, violating the Clean Air Act and casting an ugly haze on the Grand Canyon.  Closure of the mine was the result of the plant owners'  (Southern Edison and Nevada Power) refusal to install court ordered pollution control devices.  They've had since 1999 to do it.

The Black Mesa mine is located on Hopi and Navajo land and is at the base of a relocation dispute that has been presented as an age-old cultural conflict between the Tribes.  Read the full story in Orion.

Long-time attorney for the Hopi Tribe, John Sterling Boyden was found in 1997, years after his death, to have been employed by Peabody Coal (operator of the mine and slurry line)  at the same time he was representing the Hopi in land claims and coal lease negotiations.  With Peabody.  (Did Abramoff learn from this guy?)   Read about it in Phoenix New Times.

The present administration has fought hard for coal companies.  According to the Black Mesa site that quotes the LA Times, two Peabody executives were named to Bush's energy advisory team and coal companies, including Peabody, directed $900,000 to Republican coffers.

(I)n the spring of 2001 Cheney announced the administration's new energy plan, which calls for the construction of 1,300 to 1,900 new power plants. For 120 years, (Peabody) was a privately held company. Four days after that plan was announced, Peabody issued an IPO and went public. Peabody's stock went on sale and the company received $420 million, about $60 million more than analysts expected.

There is a lot at stake for king coal and for power companies.  Mainstream press coverage bemoans the "tragic" loss of jobs for the Hopi and Navajo miners and Laughlin area residents who worked at the plant.  But the more simplistic the presentation, the more complex the real story may be.