Interesting Los Angeles Times story by Tony Perry with audio slide show about Marines in the Sierra Nevada learning about pack animals in training for Afghanistan. 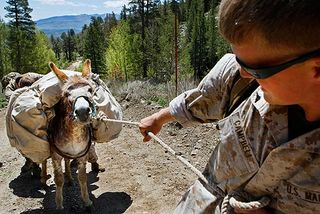 The weapons of war have changed, but the basics of handling donkeys and mules -- like the sawbuck saddle and packs on Annie -- are not much different from how they were in the time of Genghis Khan.

"It's a very primitive way to carry very modern weapons," said Sgt. Joe Neal, one of the instructors. "But it works." (...)

"It's a dying skill that we need to revive," said Sgt. Jerry Meece, 35, a lean, slow-talking native of Lufkin, Texas, who was a rodeo bull rider for a dozen years before enlisting.

The animal packers course dates to the 1980s, when the CIA sent operatives here before they were dispatched to help the Afghans fight the Soviet occupation force. The agency bought several thousand mules for the Afghans to maintain supply lines.