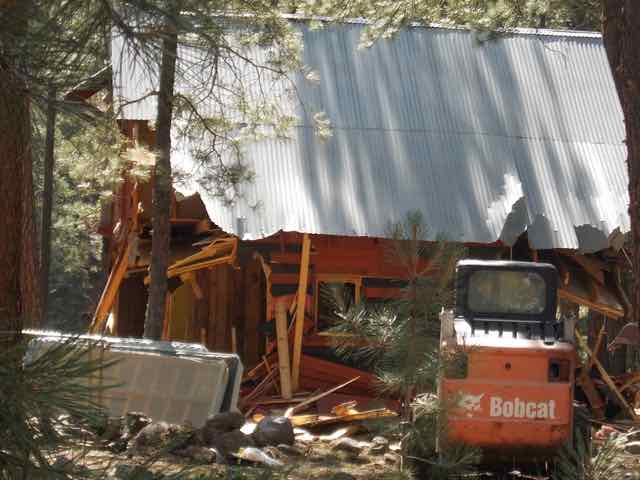 It was a surprisingly small machine that began the undignified work of razing the little old red cabin. The sturdy place took the pounding insults for much longer than it took to finish our drinks while we watched from Rene’s porch.

A young man rode a small bucking bulldozer that bashed at the corner beams. With each hit of the bucket he bounced out of his seat. He would have come off completely if he hadn’t been strapped in. He dramatically tossed his helmet away at one point as it was a little too large for his slim damp head and kept falling over his eyes.

“It seems like an inefficient way to do that, doesn’t it?” Rene gingerly maneuvered down the stone stairs with her overfull cup.

“A match would have been whole a lot easier.” She immediately regretted saying it and spent the next several hours assuring Rene that she was only making a joke.

The little red cabin had to go. There was no foundation, the fireplace was falling down, the outside stairs to the bat-filled loft had rotted away, and the whole place smelled like rotten meat. It sat on the premier site at a bend in a deep trout-filled river where a wealthy young doctor and his wife wanted a new fishing cabin.

It was the oldest cabin. It was there before the ranch sold off that portion of their land in the fifties to a local boy who had promised to make the 80 acres into a nice fishing resort but carved it into tiny lots instead. He became president of the local bank.

When the roof finally toppled over they cheered along with the crew. But it was sad.