He tells me of places he’s been. Many are lost, long ago places. Some are no longer accessible for this reason or that. We try to go to some that are. Sometimes we picnic at ancient Pueblos.

First stop on our big day trip, The Range in Bernalillo at the crack of 11:30 a.m. because Jerry’s not a morning person. Food is important to fussy old people. In this case it’s me. He’s happy eating anything or nothing, but especially unhealthy anythings that old people with bad hearts shouldn’t eat.

“Ham and eggs!” He pronounces his choice defiantly. Even the waitress looked a little surprised. I said, “Are you sure?” He said, “I can handle it.” Like dietary fat is a steep climb.

Fretting over the condition of Jerry’s car is another apparent ritual of mine. It has a lot of wear and is full of items in the back that would surely kill us if it ever rolled. One time he had a flat tire and it took about thirty minutes to get to the spare.

There was once a place - New Mexico’s largest swimming pool - with a Pueblo Revival-style adobe bath house built by a guy who worked on La Fonda Hotel in Santa Fe. It was on the State Historic Register, I think. But now it’s gone but for the cracked slabs of aqua and weeds. A kidney shape visible west of Tucumcari in a park no one goes to anymore. Sad, really. The old bath house was torn down by a restless city employee with a bulldozer and too much testosterone and under the guise of safety because the city wouldn’t pay to fix up its crumbling walls. Maybe the big lake they made to the north reduced demand for the swimming pool. Maybe it was just too costly to pump the bazillion gallons of water it took to fill it. Maybe realignment of Route 66 made it too far off the road for convenience. 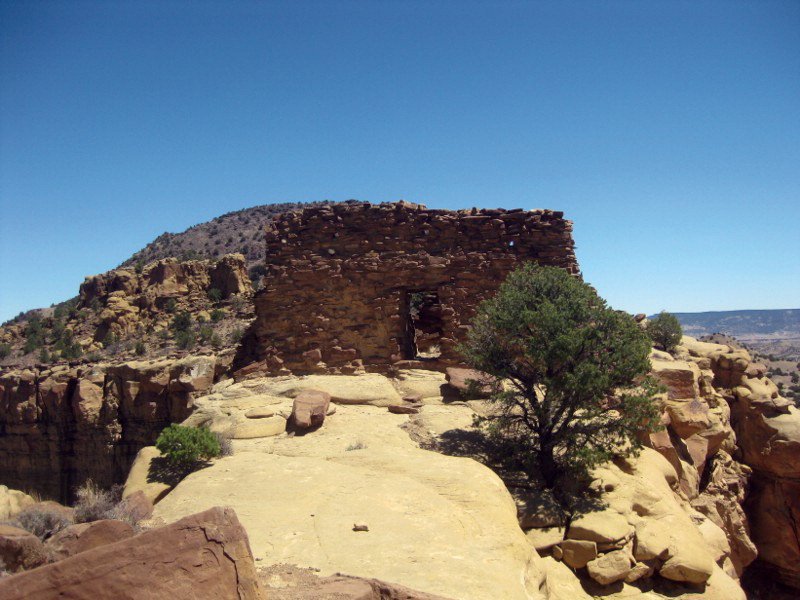 There is an ancient defensive structure built by the Navajo on top of a tiny remote mesa that Jerry hiked to many years ago. It is on public land but is nearly impossible to get to without crossing closed-off private land. People do, somehow. There’s a  YouTube video (isn’t there always?) by a guy who probably trespassed to get there. He demonstrates many “don’ts” of videography as well as his apparent fear of heights with dizzy panning, most of it aimed downwards. But you get a few tantalizing jittery glimpses of distant volcanic necks and cones. The mesa narrows and steep cliffs edge both sides of trail. Our Youtube hero (we are cheering him on) is evidently impressed and as he progresses toward the rock structure fortification and single doorway he gets shakier and shakier. At one point he loses focus completely and spends minutes on fossil close-ups like a stoned geologist. He never makes it to the doorway, stopping a full shaky thirty feet away, saying nothing. There’s only the sound of constant wind and his labored, frightened, breathing.