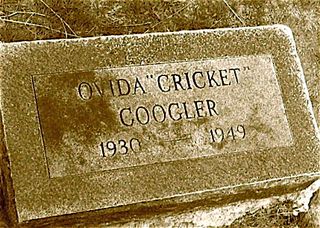 Annual watching of The Silence of Cricket Coogler, in her memory.  Her body was found Easter morning south of Las Cruces near the Mesquite cemetery.  The cover-up and political intrigue surrounding the murder reverberates today - 61 years later.

Here's the You Tube short about the movie and my post about Paula Moore's book on Duke City Fix.

Reading Before the Storm

Or in-between storms with the Rick Perlstein book of that title about Barry Goldwater, described well by writer Kevin Murphy.

In Perlstein's book, what's past is prologue: "It is hard, now, to grasp just how profoundly the tectonic plates of American politics have shifted between 1964 and today...the opening years of the twenty-first century [are] as surely a conservative epoch as the era between the New Deal and the Great Society was a liberal one." (x, xiv) In sum, Perlstein sees the beginnings of the conservative maelstrom that has engulfed our present in the Goldwater eruption of 1964, and given how expertly and entertainingly he puts his historical ducks in order, its hard to disagree with him.

The upper-story bedroom perch at cold mud house affords a commanding view of that past as prologue thing.  From here, bed-ridden with my head-cold, I watch the incoming storms - clouds, radio stories and blogs.  Through the media you can view repeated strategies used to defeat health care reform.  Opponents cast a long dark shadow of filtered misinformation to protect profits.  Our daily paper's editorial board has the need, at this particular time, to stand up for that little guy non-profit Blue Cross and Blue Shield.

A new book about water called Water by Stephen Solomon is out and on my reading list.  Here's a radio interview capturing how the wealth of nations throughout millennia can be measured by their access to water.  He concludes the interview on a positive note about how water wealthy we are as a country and continent.  Our water advantage will make us a mini Saudi Arabia of water in the 21st century giving the country global advantages.

Ought make us think twice about polluting and wasting what we've got. 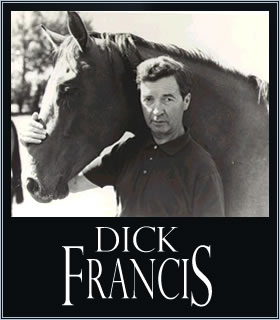 His lifelong deep affinity for horses is described by The Mail Online - Welsh-born to a "horsey" family,  a truant who rode more than he studied.  (Sorta sounds familiar.)

But the bestest part about the Mail story that the Times won't touch is the contention that Francis didn't write his books.  His wife did. 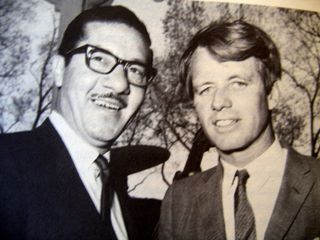 David Roybal's biography of Fabian Chavez Jr., published in 2008, is rich and juicy with New Mexico political history.  I was hooked even before I got to Fabian's description of working with his battalion's horses at Fort Bliss before the war.

Between learning how to maneuver the horses, how to march, taking orders, and all that other stuff that goes with the military, there was no escaping the horse manure.  Man, we spent a lot of time cleaning up behind the horses.  Our monthly pay was thirty dollars.

Knowing a load of manure when he saw one doubtlessly helped Fabian in later political struggles - though Roybal never puts it so indelicately.

Especially interesting are the descriptions of Senator Joe Montoya and "his group" who worked against Chavez throughout his career - including when he ran against incumbent Republican Governor "Lonesome" Dave Cargo in 1968.

Fabian's position and his capacity to lead were very, very noticeable and very frightening to the entrenched political system at the time.  Romero said.  He said U.S. Senators Clinton Anderson and Joesph M. Montoya considered Chavez a political threat ....

So they decided to get rid of him," Romero said.  "In those days, the two very prominent benefits of politics were not only your power, but also patronage, the spoils system.  I think these two men were very reluctant to share the patronage system or have it disrupted. You talk about control.  They controlled the political nature of this state, and they certainly didn't need anybody else with any amount of power, and not only power, but courage.  Fabian had courage, and he was very capable of going toe to toe with them on issues that they supported and he didn't.

Newport - not so new.  Old houses and old roads and old fences and old mansions.  We toured "Marble House" - a Vanderbuilt mansion in which Alva Vanderbilt staged a "Votes For Women" campaign in 1909.  In 1910 she attempted to broaden the movement. 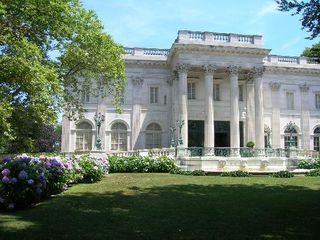 Alva embraced the idea that white suffragist groups should affiliate with 'colored' female suffrage, and encouraged black women to join her PEA [Political Equality Association] albeit in a separate grouping.  This brought calumny down upon her head from all sides, with some calling her 'an evil influence '.

'With characteristic feminine disregard for logic, the social leader ...would confer the ballot on Negro women at a period in American history when public opinion in the North has begin to doubt the wisdom of the Fifteenth Amendment,' expostulated one newspaper.

From Consuelo and Alva Vanderbilt;  The Story of a Daughter and a Mother in the Gilded Age, Amanda MacKenzie Stewart.

The 1967 Look Magazines - a four-part series by William Manchester that preceded his book Death of a President are totally absorbing - especially the old ads for Pall Malls and the 1967 Plymouth Fury.  I've been too busy reading them to note the passage of the anniversary Sunday.  Esquire draws a connection with today's hateful rhetoric. 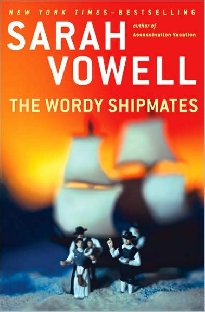 The Kennedy in the "news" was JFK's nephew, Rhode Island Congressman Patrick.  He was not yet born when the President died.  He's been barred from communion for being pro-choice.

I'm heading for Kennedy country today - Thanksgiving in Providence - and read Sarah Vowell's The Wordy Shipmates in preparation.  The New York Times called it "a pop history of the Massachusetts Bay Colony" like that's a bad thing.

A detour in recent reading veered away from the regimented non-fiction book diet.   American Wife, a novel by Curtis Sittenfeld modeled on the life Laura Bush is reviewed here in the NYTimes by Joyce Carol Oates who does a better job than I can.  The First Lady, Alice Lindgren Blackwell, confesses she didn't vote for her husband either time.

“All I did is marry him. You are the ones who gave him power.” 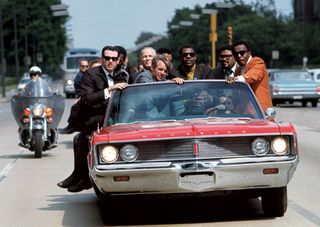 Back with the reading program is The Last Campaign: Robert F. Kennedy and 82 days That Inspired America, by Thurston Clarke, 2008.   This on the heels of reading the 1967 account of  JFK's assassination, The Death of a President.   The endings are where similarities between the books stop.  The Last Campaign is an intimate look at the mood and spirit and very special qualities of Robert's presidential campaign.

Mary Jane and The Alvarado 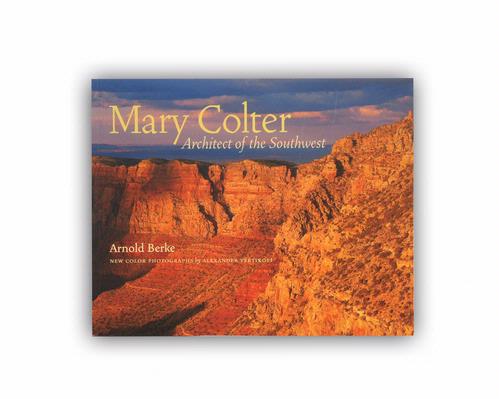 Just finished devouring Mary Colter: Architect of the Southwest, by Arnold Berke with color photographs by Alexander Vertikoff.  It is a beautiful book.  If it can be faulted it may be that this beauty nearly outweighs the substance.   Clearly this is an architecture book, not a biography.  It contains precious little of personal note about Colter herself - in spite of its apparent thoroughness about her work.

Men Who Stare at Mules

The "goat movie," as people buying tickets referred to it, was great.  Goats, Clooney and it was filmed in New Mexico.  What is not to love?  White Sands National Monument is a Middle Eastern desert again.  Just like in the 80's Sean Connery movie bomb, Wrong is Right.

In downsizing and packing there is a growing pile of must read books - books that can not possibly be packed before they're read.  These join the many borrowed books which must be read before they get returned.  Once this system was established it seemed imperative to apply it retroactively and begin unpacking already packed boxes.  Luckily, I don't have time.  I'm too busy reading and watching goat movies.